Professor of Sociology and Criminology 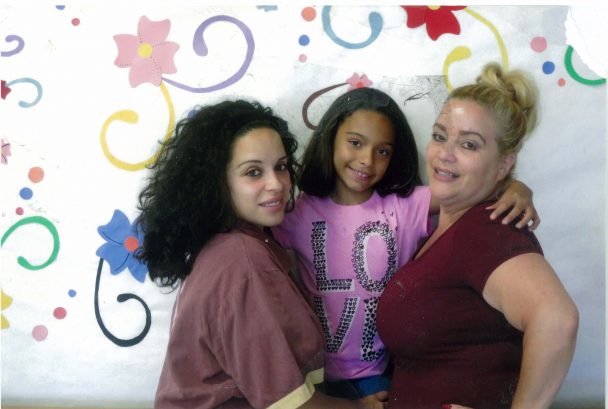 UPDATE (March 11, 2020): On July 10, 2019, a federal court granted Cynthia Alvarado’s habeas conviction. The ruling vacated both her conviction and sentence. The Philadelphia District Attorney’s Office did not appeal the federal court’s decision. On March 11, 2020 Cynthia Alvarado was released from prison following a plea agreement with the DAO. For more on her case, check out my TEDx talk and this story in the Philadelphia Inquirer about the work of Villanova students assigned to the case.

Allow me to introduce you to Cynthia Alvarado (Cyndi to her friends). This is a photo of Cyndi, her daughter, and her mom. It was taken at SCI-Muncy, the largest and oldest women’s prison in Pennsylvania. On any given day, 1400 women are imprisoned at Muncy. Of those, 145 are doing life sentences. Cyndi is one of them.

In September 2018, I gave the undergraduate students enrolled in my Punishment & Society course an optional assignment: investigate the cases of a select group of men and women from Philadelphia serving life sentences. I tasked them with putting together a comprehensive report detailing the crimes they were convicted of and the case against them. Just over half the students took up the challenge. After receiving permission from the incarcerated men and women whose cases we selected, the students worked in teams of two or three and spent much of their time reviewing trial transcripts, appellate decisions, and local media coverage. Some of the teams were able to discuss the case with those who were directly involved (including police offices, court officials, witnesses, and defendants). By semester’s end, the teams submitted a detailed report about the case and made recommendations regarding whether or not the case should go forward to a new team of students the following semester. Some of the teams reported that the conviction and sentence in their assigned case was solid and recommended against passing the case onto their peers. Other teams identified problems associated with outcome of their assigned case. In most instances, the problems they uncovered suggested either a wrongful conviction or a disparate sentence. Cynthia Alvarado’s case is both. In other words, it is a wrongful conviction case and it is an instance of extreme sentencing disparity.

The following semester, I passed along the Alvarado report and case file to a team of six students in Senior Seminar– the capstone course for undergraduate criminology majors at Villanova. I gave them a more ambitious assignment: write a comprehensive biography of the crime and the case. This meant tracking down everyone involved, mapping the crime scene and the neighborhood in which it happened, and analyzing the transcripts and police reports with an eye to evaluating the integrity of the prosecution’s theory of the crime. Beyond this, I requested that the students situate the case within the broader socio-historical context in which it played out. What does the Alvarardo case tell us about poverty, race, gender, and the criminal justice system in the city of Philadelphia?

Her case encapsulates all the excesses and injustices of the War on Drugs and punitive crime policy. It is an amalgam of police corruption, witness intimidation, abuse of prosecutorial power, ineffective assistance of counsel, and flawed  instructions to the jury. In spite of this, there aren’t investigations of her case in major news outlets or minor blogs (save this one). There is no #MeToo exposé of her interrogation at Homicide. Defense committees aren’t organized to #FreeHer. Her hashtag isn’t trending on social media. It should be.